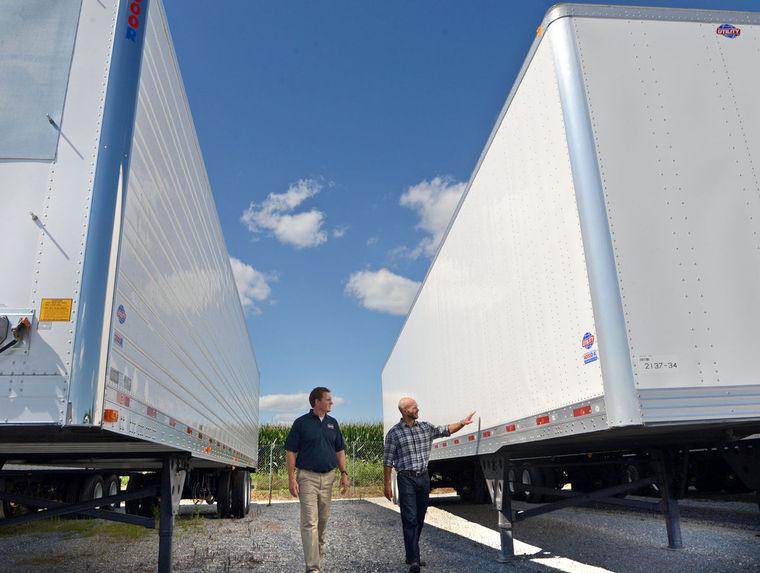 Everything your semi-trailer needs in one location at Utility Keystone.

This Manheim-based business, which turned 35 in February 2014, is looking forward, not backward. A One-Stop for Semi-Trailers.

It has built a foundation for growth by expanding its product line, adding a shift of employees, growing its lease and rental division, and upgrading its facility, Vice President Bill Zeamer said.

Since its founding by his father, Stan Zeamer, UKTS has offered a full line of truck body kits and refrigerated, dry freight, and flatbed trailers.

“We’re similar to a Ford or Chevy dealer,” Bill Zeamer said, “only instead of selling or leasing cars, we have commercial transportation trailers.

“We offer sales, service and parts just like a car dealer would.”

The company services customers throughout south-central Pennsylvania up to the New York border, east to Philadelphia, and south to Baltimore.

“We also have service contracts for all the national trucking companies like J.B. Hunt, Schneider and C.R. England,” Bill Zeamer added.

“So if a truck on a national run breaks down or needs a part and they’re in PA, we can help them.”

“We were doing very well, but we started losing opportunities to existing customers because they wanted products we didn’t have,” he said.

“We wanted to expand our offerings and meet new demand.”

With the MAC line, UKTS will be able to serve thousands of new customers, specifically agricultural businesses that haul products requiring a dump trailer.

The container business is expected to boom

“Product is shipped from overseas in large containers on cargo ships and then the containers are placed on chassis and taken to warehouses, unloaded and the chassis go back to get more product,” he said.

With the expansion of the Panama Canal, set to be complete in 2015, the container business is expected to boom, he said, and UKTS is poised to take advantage.

“With Cheetah, we’ll be branching into container movement,” he said. “These new lines will open up specialized markets for us.”

The business completed a $550,000 upgrade to its facility in August. The four-month overhaul included improvements for both employees and customers, Bryan Zeamer said.

A One-Stop for Semi-Trailers

UKTS employs 65 people, including full-time and part-time workers, and recently added a second shift to keep up with demand, Bryan Zeamer said.

Along with selling trailers and parts, the company has a lease and rental division as well, which has grown from 150 trailers in 2012 to more than 350 out on the road in 2014.

Additionally, another 40 lease and rental trailers are on order and are expected to be in service by the end of the year.

The array of initiatives has helped UKTS leave the damage from the “Great Recession” behind.

Since 2009, when annual revenues tumbled to $17 million, UKTS has rebounded steadily. It forecasts revenues of $45 million to $50 million this year, Bryan Zeamer said.

Bill Zeamer said much of the company’s success can be credited to their father.

Stan Zeamer started the business in the late 1970s when he left a position as a college professor and wrestling coach to open the company with Bob and Nelson Behmer. They rented one office and one service bay.

By 1980, they were able to purchase 6 acres of land along Route 283 to build a new facility with four drive-through bays and 1,700 square feet of open parts-display area.

Stan Zeamer bought out the Behmer’s in 1984.

In 1987, Stan Zeamer’s brother Cliff Zeamer joined the company. By 1996 both Bill and Bryan Zeamer were on board.

In 2000, the company moved to its current location on 42 acres west of Lancaster along Route 283.

“My father was very smart and had us report to managers and not directly to him,” said Bill Zeamer, of how the company navigated the sometimes-tricky aspects of family working with family.

“He allowed us to make mistakes, take risks and learn from them versus telling us what to do.”

Bill Zeamer said his father gave both him and his brother the freedom to make their own decisions, but to ask for help when needed.

“He was wise enough to work with business coaches and consultants to help the business,” Bill Zeamer said.

Although Stan Zeamer retired in 2010, he remains chairman of the company and comes in about once a month.

Bryan Zeamer said the company’s success can also be traced to local ownership that’s involved in daily operations of the business.

“We’re an independent franchise,” he said. “A lot of our competitors are not locally owned. We also have a great team with 10 years of service on average for our employees.”

Bryan Zeamer said teamwork permeates everything at the company.

“We have a culture of a team that has fun but is working hard to reach goals and also to serve our customers,” he said.

“We’re very customer focused. Our father instilled that in the company from Day One, and we want to continue with that.”

The expansion of the new lines and other growth of the company are all part of a master plan to become the place to go for trailers, Bryan Zeamer said.

How Can We Serve You?